Yesterday, the boy protagonist, Kale Flores, from the Sassafras House series was introduced.

Treasure is one of the key characters in the Sassafras House series. Kale and his friend, Jasmine, found Treasure living alone in the old Sassafras House when they searched for hidden treasure. Knowing the demolition of the decrepit house was imminent, Kale rescued the homeless cat, and she became his first pet. Treasure is a beautiful all-white cat, and she is unique in several ways. First, she has heterogenous eyes, one blue and one golden. Also, Treasure is a good judge of character, and she proves herself to be valuable by helping Kale solve mysteries. Many readers have been fascinated by Treasure and her unusual abilities. 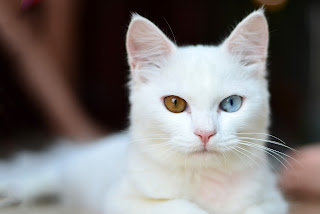 Image by Firman MPH from Pixabay