Although I didn't know what it was called, I recognized weeks ago that I was affected. The infection rates for Covid-19 have drastically declined in my area, so many people have returned to their normal group activities without wearing masks. People have resumed attending church services, gathering for weddings or funerals, and eating in restaurants. It has been very difficult for me to switch back to normal. I learned that when someone has anxiety about getting out in public again it is called "cave syndrome."

These public gatherings were once normal activities that I took for granted. In March 2020, more than a year ago, all these things ground to a halt. Out of necessity I became a homebody. If I had to be near anyone except immediate family, I strapped on the mask. This became a new way of life for me. I didn't like it, but I thought it was something that had to be done for the greater good.

When the vaccine was offered, I took the required doses. The first time I returned to church, I wore my mask. Most of the people in the building were not wearing masks, and I came close to a panic attack. I've had to ease into re-entering the public. After such a long time of being cooped up, why would I fear doing the things I once loved? I suspect it is because I tend to be a rule follower. I accepted what the CDC said the public should do, and I did it. I followed their rules and adapted, but now it's hard to adjust to new rules. The good news is I'm doing better at being in public places, but I keep hand sanitizer at the ready. There are bound to be others who suffer from this thing called cave syndrome, but it feels like I'm the only one. Was it easy for you to transition, or are you, like me, having trouble coming out of the cave? 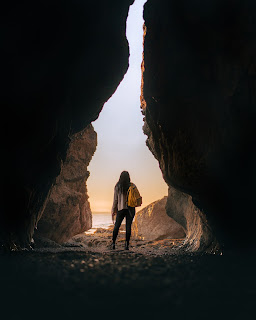 Photo by Ola Dybul on Unsplash